Email: This email address is being protected from spambots. You need JavaScript enabled to view it.
Friday, 12 August 2016 12:31 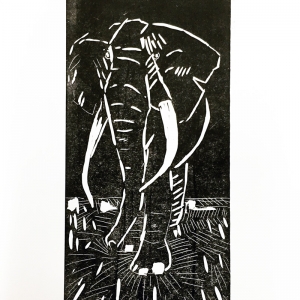 This is a linocut print, using ink and carving tools.  It depicts a mature female Elephant on the African savannah. 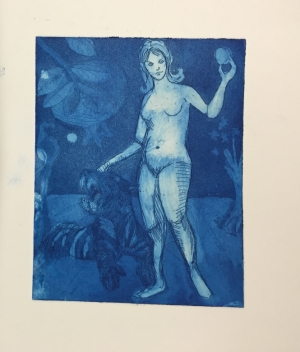 This is a print made using aquatint. The process involves drawing on metal, etching texture onto the metal with wood dust, acid and wax, and using fire to temper and tame it at various points. All very laborious and exciting.

The image is of a nude female and her Tiger. Persephone, perhaps. In a pomegranate grove. 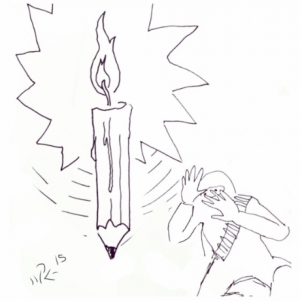 This is a cartoon I drew in a mangrove swamp in Sri Lanka, which is where I was when I heard the shocking news of the terrorist murders of innocent cartoonists, office workers and jewish shop workers.

I drew it in my notebook, then took a photo, edited it a little with SketchBook and when I was close to a wifi signal uploaded it to Instagram and my cartoon blog.

Cartoons are not provocation for murder. God, if she exists, cannot be as pathetically insecure as those who believe they are.

You can buy prints of my work at Saatchionline

I publish cartoons to my blog isthissomekindofjoke.wordpress.com

A picture is worth a billion dollars

This is an article that I wrote for Creative Boom, part of The Guardian's Culture Professionals Network. All links open in a new window:

A picture is worth a billion dollars

Facebook has just paid $1bn for Instagram, the social photo-filter app. Why? You might ask, what do they hope to gain from buying a service that essentially enables people to take a photo of a coffee cup, and then instantly make it look like it was taken in the '70s?
Well, there are some interesting figures compiled by 1000memories that might explain the reasoning.
Did you know that Facebook's photo library is the largest on the planet? There are over 140 billion photos there. Including that one of you dancing on a table with a bra on your head.
Ten per cent of all the photos that have ever been taken were shot in the past 12 months.
Think about that for a minute. Since 1826 and this, the first photograph, a black and white shot of a view from a window there have been (approximately) 3.5 trillion photos taken.
Digital cameras, smartphones and the internet have made the process of photography, development and publication instantaneous. Apps like Instagram make the editing aspect instant too. Now everyone can create a pleasing artistic product in a matter of seconds.
But how do professional photographers, designers, creatives, people who make their living from creating these artistic products, keep from being drowned in this ocean of content? Have they been made redundant by technology?
You could argue that the artistic skill is in seeing; you look at the world in a way different enough from others that you create things better than the average person.
An iPhone doesn't have a mind, let alone a mind's eye. The closest thing to a mind it has, Siri, is fine, but if you say to Siri 'create a masterpiece', all that happens is it mishears and rings your ex-girlfriend, then you have to have an awkward discussion about that time you danced on the table at her Grandad's birthday, with her bra on your head.
Maybe everyone is equally creative, all that stood in the way before was opportunity and an understanding of how to use the equipment, with an app like Instagram there is no need to know how a darkroom works, or even Photoshop, you just click and publish. This is the future, now.
Andy Warhol said that in this future everyone would be famous for 15 minutes, but I've done some quick maths. To watch everyone on Earth's 15 minutes would take 2,996,575,342.5 years. Imagine watching 'Earth's got talent' for that long.
Robert Hughes, the art critic, referred to Warhol as 'one of the stupidest people I've ever met in my life' but Andy Warhol was, at the very least, a kind of human Instagram. He took a mundane image - of a soup can - for instance, and applied a filter to it that made it 'art'. But what are we to do when everyone is Andy Warhol? When there are 140 billion images on Facebook, 3.5 trillion photographs on Earth?
It seems to me that we need, desperately, filters, but not necessarily the type of filters that make your photo of a coffee-cup look like it was taking with a Polaroid camera. No, we need filters that process content in terms of quality.
Perhaps the social element of an app like Instagram, of a network like Facebook, can through 'upvotes' and 'likes' create a hierarchy of quality, but this is not assured. A bad photo of Justin Bieber may well receive thousands more likes than a good photo of a soup can.
Are you a photographer or a designer? Do you feel threatened by this glut of content? Do you think that Instagram is a valid artistic tool, or do you think it a gimmicky toy that crowds out real creativity? Tell me - you have fifteen minutes.

Michael Fredman is a London based writer, editor and creative who has worked on web and print publications in fields as diverse as international politics, health and film.

The division between left and right is a no brainer

This is an article that I wrote for Creative Boom, part of The Guardian's Culture Professionals Network. All links open in a new window:

Are you a creative person, or are you a logical person? Chances are that if you are reading this you consider yourself a 'creative person'. If you were asked what side of the brain dominated your personality you would most likely say the right-hand side, for it is this hemisphere that in popular psychology is labelled as the creative, while the left is designated the logical, nerdy side. You can even look at a twirling dancer to supposedly test which type of brain you are the proud owner of.

The modern idea of a laterally divided brain is largely based on the findings of Roger Sperry, who won the Nobel prize in 1981 for his ‘split brain’ experiments.

However, as Ian McGilchrist (among others), points out, this simplification is no longer considered accurate by neuroscientists.The true nature of the brain is more complex than a left-right divide. Yet this generalisation perpetuates and extends to the distinction between art and science in the world at large. The caricature is that the world of the arts is entirely emotional and that of science is entirely logical, but is this necessarily so?

Take for instance the work of Leonardo da Vinci. It is well known that he drafted designs for a range of ingenious inventions, including a parachute, a tank - even a helicopter, and at the same time he drew and painted exquisite renderings of figures and scenes. Thanks to his inquisitive dissection of dead bodies, his art is alive with the tension of the musculature beneath the flesh. But was Leonardo a scientist, or an artist?

At the British Museum currently Grayson Perry, the Turner Prize winning artist, curates an exhibition entitled 'the Tomb of the Unknown Craftsman'. His work is placed alongside objects from the Museum's collection that he has selected for their resonance to his work and the themes he finds profound.

This exhibition is an example of how the logic of taxonomy, the painstaking archeology of fact, can co-exist with the emotional, personal - creative - world of the artist.

A Museum is a place more of logic than of art (even when filled with art). The British Museum in particular takes the sacred objects of other cultures and displays them to be viewed in a new context, removed from the spaces and times that confer specific meaning to them. The simple fact that sacred objects of one culture are displayed alongside sacred objects of another immediately negates the mythic power of each, where before they had claimed to hold the ultimate truth, the potency of alignment with God/Gods, in parallel they become examples and not the exemplar.

Yet reason and emotion can co-exist. We live in an age of tremendous ideas, of scientific breakthrough. The large Hadron collider at CERN for instance, attempting through experiment to show us what exists in our universe at the elementary level. And here artists have been invited to participate. CERN has a program inviting creative people, artists, to a three month residency (new window)  to explore and translate the science into art. Can art be scientific? Can science, logic, be art? A Mathematician may see great beauty in a formula and an artist may see great truth in form, but are they relatable?

Perhaps the simple fact that there is a common cause is enough, both the artist and the scientist are attempting to make sense of what is.

On the website of CERN’s artistic residency program the words of Einstein are used:

This is true and there is also a symbiosis: Imagination needs knowledge, to fire it into life, and knowledge needs imagination to innovate.

We are all of us neither left-brained or right-brained. We are whole-brained. Look at the dancer again, blink, and see if you can make her spin the other way. There you go. You are Leonardo da Vinci.

Published in Home
Tagged under
Read more...
Page 1 of 11

Well one answer is because quantum objects behave differently to objects at scale we exist; while a quantum object… https://t.co/GHSh6PLi8E

@Londonfor3 @Snafflepuss @nadinebh_ Well thank you, now we have both your tweet and Nadine’s article to read and dr… https://t.co/aqycmfQ6f6

@nadinebh_ Is that the same Asa Winstanley who was rightly suspended from the Labour Party over anti-Semitism and t… https://t.co/94AzoKWvCd